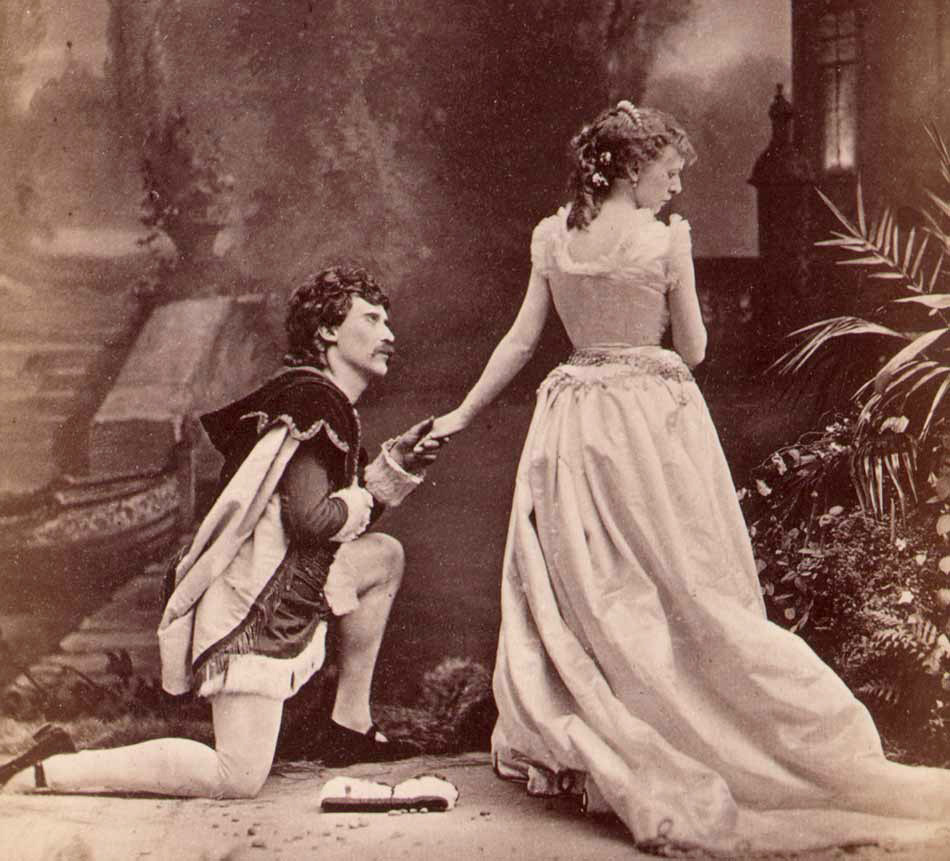 It is one of the most famous lines in literature: “All the world’s a stage, and all the men and women merely players.”  Shakespeare’s words from As You Like It, Act II, Scene VII, are spoken by his character, Jacques, a morose and melancholy man. The line, as part of Jacque’s speech, is so often invoked about life in the theater, about everyday life and about everyone’s cosmic role in an earthly existence that one almost expects to see it carved on public buildings and graffitied on alley walls. Beyond that opening line, however, is a poem that follows describing the path from the cradle to the grave and what one experiences along the way from birth to oblivion:

…They have their exits and their entrances,

And one man in his time plays many parts,

His acts being seven ages.  At first, the infant,

Mewling and puking in the nurse’s arms.

Then the whining schoolboy, with his satchel

Unwillingly to school.  And then the lover,

Made to his mistress’ eyebrow.  Then a soldier,

Full of strange oaths and bearded like the pard,

Jealous in honour, sudden and quick in quarrel,

Even in the cannon’s mouth.  And then the justice,

In fair round belly with good capon lined,

With eyes severe and beard of formal cut,

And so he plays his part.  The sixth age shifts

Into the lean and slippered pantaloons,

With spectacles on nose and pouch on side;

His youthful hose, well saved, a world too wide

For his shrunk shank, and his big manly voice,

And whistles in his sound.  Last scene of all,

That ends this strange eventful history,

Is second childishness and mere oblivion,

William Shakespeare, being Shakespeare, took an ancient notion of dividing human existence into stages or eras, a popular motif in both literature and art, put to it his own writing talent, and even used the concept in more than one play.  In much of his work, Shakespeare borrowed, refined, refreshed, created anew and made it immortal. Even the idea of life as a stage and men and women merely players playing a part extended at least back to the Roman poet Juvenal in the first century A.D. who used it to describe Greece and Greeks in Satire 3. The “seven ages” of man penned by William Shakespeare in As You Like It became a popular theme in the 19th century when there was a virtual mania for anything about the bard – editions of his plays for both children and adults, etchings of his characters and stage settings, statues and commemorative collectibles. There were various literary takes on the subject as well as paintings, tableaus and photographic interpretations. One of the most celebrated sets of pictures were those staged by Cincinnati photographer James Landy in 1876. He created them for showing at the Centennial Exhibition in Philadelphia that year, presenting them in three formats: a set of small cabinet cards, or cartes de visites, a set of large prints, and as a book with tipped-in photographs, published in Cincinnati the next year by the Robert Clarke Publishing Company. It is a copy of this book held by the Archives and Rare Books Library, part of the Enoch Carson Shakespeariana Library, donated to the University of Cincinnati by William A. Procter in 1900 (call no. SpecCol RB PR2883.L3). Procter also purchased and donated publisher Robert Clarke’s personal library as well. Landy’s book is formally entitled Shakespere’s Seven Ages of Man, Illustrated with Photographs from Life. The spelling of Shakespeare such as Landy used was fairly common at the time and interchangeable with what is the accepted spelling today. As a photographer, James Landy was very familiar with the passion for Shakespeare. He was born in New York City in 1838 and at the age of 12 he began his career working as an apprentice in the photography studio of Silas Holmes on Broadway. During the Civil War, he came to Cincinnati in 1862 and set up a studio on Fourth Street, just opposite the Pike’s Opera House, which regularly presented Shakespeare plays. Since 1820, Cincinnati had been on the circuit of traveling troupes who also visited Louisville, New Orleans, Charleston, Savannah, St. Louis and Pittsburgh. Many of the prominent Shakespearean tragedians (Othello, Macbeth, Hamlet, King Lear, and Julius Caesar being the most favored productions rather than the bard’s comedies) regularly made stops in Cincinnati and they often went to Landy’s studio to have their pictures taken for promotional photo cards. Edwin Forrest, Edwin Booth, Charlotte Cushman and dozens of other noted actors used the talent of James Landy for their portraits. He began his career making daguerrotypes and when that technology was supplanted by collodion photography, he employed that, and by the 1870s was using the dry-plate or gelatin emulsion process. Of course, Landy photographed more than Shakespeareans. He was noted for his photos of many celebrities and politicians, as well as his pictures of buildings, scenes, the businessmen of Cincinnati and the great Ohio River flood of 1884. One of his outstanding works – and still an important reference work for Cincinnati history – is his 1872 volume, Cincinnati Past and Present, or, its Industrial History as Exhibited in the Life-Labors of its Leading Men (call no. SpecCol RB F499.C5 J6 1872b).  His photographs won awards in art competitions in Chicago, Paris, New York, Vienna and London. In creating the photographs for his seven ages of man, Landy wished to take the poetry of Shakespeare’s lines and transform them into images with which his readers would recognize. For his models he used some actors and actresses who were in Cincinnati at the time, as well as some local artists and businessmen. His mother served as the model for the first image of an old nurse holding a baby, and he, himself, was the model for the fourth image, the soldier: “Then a soldier, full of strange oaths, and bearded like the pard…” James Landy’s book is a beautiful volume, simply and elegantly designed. The University of Cincinnati’s copy contains the Enoch Carson Shakespeariana – Procter bookplate on the front endpaper. The cover is a ribbed green cloth with gilded lettering. Each of the sepia photographs is framed and tipped-in on heavy card stock with Shakespeare’s quotable “age” printed on the facing page. The text-block is also gilded on the top, bottom and fore-edges. And Landy’s dedication of the volume is to the Irish-born tragedian John McCullough, “in appreciation of his talents as a faithful delineator of Shakespere.” McCullough was a great friend of Landy’s and a popular actor throughout America. Sadly, his life came to a tragic end just a few years later. In 1884 McCullough was appearing on stage in Chicago when he broke down, ranting, and could not recited his lines. He was in the final stages of tertiary syphilis and would die a few months later in a Philadelphia insane asylum. His fellow actors held him in high esteem and in 1889 they erected a statue in his memory.

Landy continued his career for two decades more, dying of Bright’s disease in 1897. He is buried in Spring Grove Cemetery and the book he created to venerate William Shakespeare’s lines is one of the literary treasures of Cincinnati. 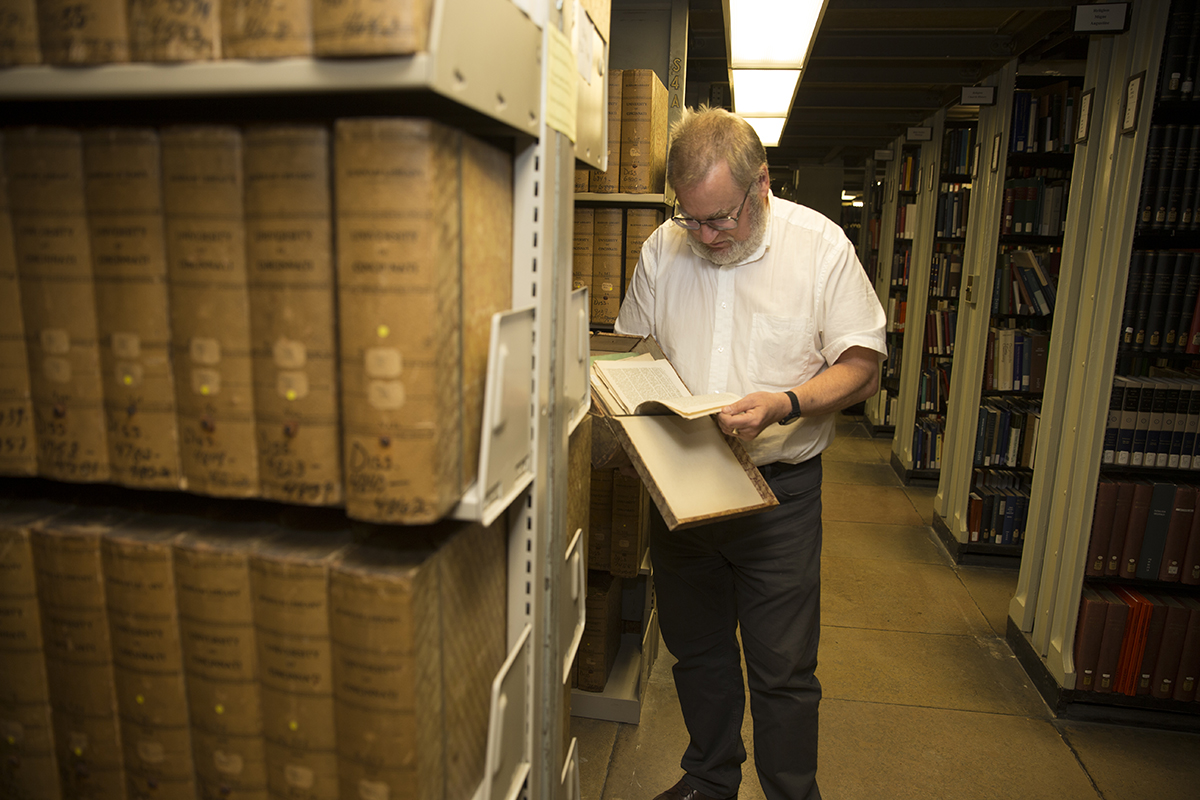 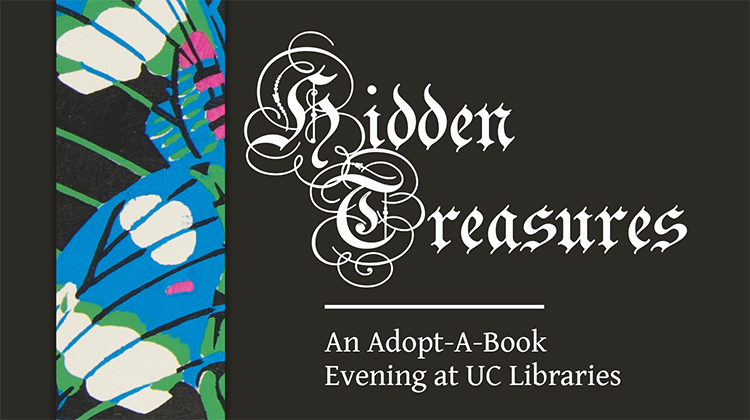 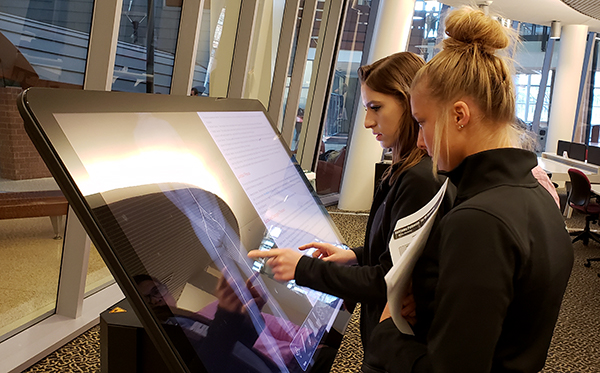