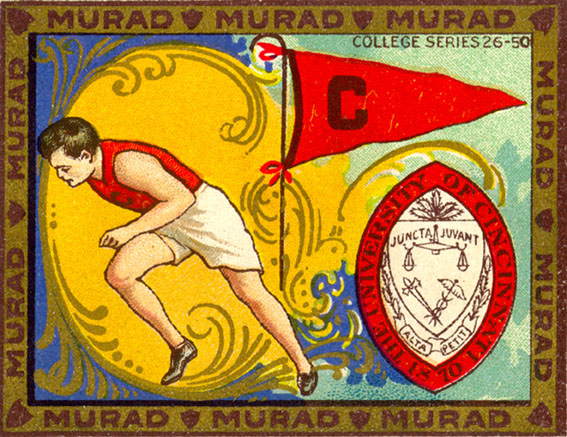 By Greg Hand. An excerpt from the script of a UC History lecture: http://youtu.be/VBrZrge6KAo

An 1881 editorial in the Academica, UC’s early student newspaper, called for colors: “The great majority of American colleges and universities have selected certain colors or combinations of colors, which, for want of an adequate term, we may designate as their ‘colors.’ These colors are of great use in intercollegiate contests in distinguishing the members of different colleges. They also have the effect of creating in the student a feeling of loyalty to his Alma Mater. Each year finds it more difficult to select colors that are not pre-occupied. We, therefore, commend this matter to our students in the hope that they will at once take measures looking to the selection of colors for the University of Cincinnati.”

Although students wrote in suggesting either green alone or “black, sprinkled with a little white,” there was no immediate action on this request. A few years later, on April 10, 1885, the the University of Cincinnati baseball team took the field against Hughes High School sporting white suits with blue stockings, belts and caps. Later that year, new baseball uniforms appeared in blue and brown. Although the university dithered about selecting official colors, each class took great pains to select a unique color. The annual for 1885, for example, records the senior class adopting green and yellow, while the juniors claimed “maiden’s blush.” The sophomores that year adopted violet.

Keep in mind that the colors might have been worn as modest ribbons pinned to a lapel, but they signified allegiance in a much bloodier occasion known as “Flag Rush.” Once upon a time, and for nearly 50 years, Flag Rush was a most popular “sport” at the university and many campuses around the United States.  Basically, here is how it worked: the freshmen class, for instance, posted a flag atop a wooden pole somewhere on campus and stationed guards to protect it. The sophomores, or other class, attempted to steal the flag and burn it. Both classes involved – sometimes juniors against seniors, sometimes sophomores against juniors, endeavored to beat the living daylights out of each other in the process, and often did.

The Class of 1891 mourned their lost flag thus:

We had a banner once, a lovely flag,
Colored in orange and deepest black,
A harmony of tone. There was a hope
Of floating in its face, that we all know
Should have been justified. How we loved.
That beauteous flag. We left it there
The brightest bloom on its fair cheek, a smile
Brightening its lovely face. In one short hour
The pretty harmless flag was burned!!!

Although the fighting was mostly limited to the men, the cheering was not. This dirge was written by one of the ladies of ’91.

As painful as it seems today, by 1889 the students had almost adopted blue and brown as semi-official colors, at least for sporting events. Although Flag Rush was popular, along with football, baseball, and track, students attempted an additional athletic competition each spring called Field Day. In 1889, events included the tug of war, hop-step-and-jump, three straight jumps, throwing the base ball (yes, spelled as two words back then), and the one hundred yard dash, among others. Music was provided by the Cincinnati Orchestra with solos by Herman Bellstedt, cornetist of Heuck’s Opera House orchestra.

When the baseball team took the field in February 1890, they were resplendent in white shirts bearing the letters “U.C.,” and dark blue caps, knickerbockers, belts and stockings. Managing the team was a senior named William Strunk. If the name sounds familiar, it is probably due to a book often called “Strunk and White” although its actual title is Elements of Style. William Strunk went on to earn a Ph.D. and enjoy a long career at Cornell, where one of his students was E.B. White, who went on to write Charlotte’s Web and other books. White updated and expanded Strunk’s classroom handouts, and the resulting book has been mandatory in freshman composition classes ever since. Strunk had served on the 1889 Field Day committee – the event with blue and brown university colors – with a sophomore named J.B. Strauss. They both held editorial positions on the McMicken Review. It was in those pages that a poem signed “J.B.S.” appeared in September 1891, titled “The College on the Hill McMicken.” Among its lines were these:

Dear colors on the heart resplendent glow,
Dear colors red and white you know,
Of a wondrous crowd well met
In a tip-top place you bet,
On the College on the hill, McMicken.

J.B.S. was, of course, Joseph Baer Strauss, the man who built the Golden Gate Bridge and placed a brick from that old college on the hill in its anchorage. But in September of 1891, Strauss appeared to be egging on a decision about university colors with his suggestion for red and white. Mr. Strauss made a formal request for the adoption of university colors in December of 1891 – this time for black and white. Student government voted against that combination, and assigned the issue to a committee that included Estella May Riley, Addie Levy,William Gustav Langenheim, Frank W. Stevenson, and George Paxton Diehl.  This committee deliberated for five months before announcing in April 1892 that the university colors would be black and scarlet.

Inspired by this decision, the student government went marching onward to other heights:  “Black and scarlet, after considerable discussion, were adopted as the colors of the University of Cincinnati. Standard colors will soon be in the possession of the committee. All students are requested to wear these colors on all occasions. It was decided to adopt a university button. Messrs. Diehl and McGuffey were appointed to investigate designs, prices, etc. In the judgment of the committee there should be a university banner to be used on all University occasions. Misses Riley, Esselborn, O’Hara and Rice were appointed to a committee to secure one.

And that is how the University of Cincinnati adopted the Red & Black.

To learn more about UC’s history, please visit the Archives & Rare Books Library on the 8th floor of Blegen Library, go to the website section on the University Archives, e-mail archives@ucmail.uc.edu, call (513) 556.1959, or find ARB on Facebook. 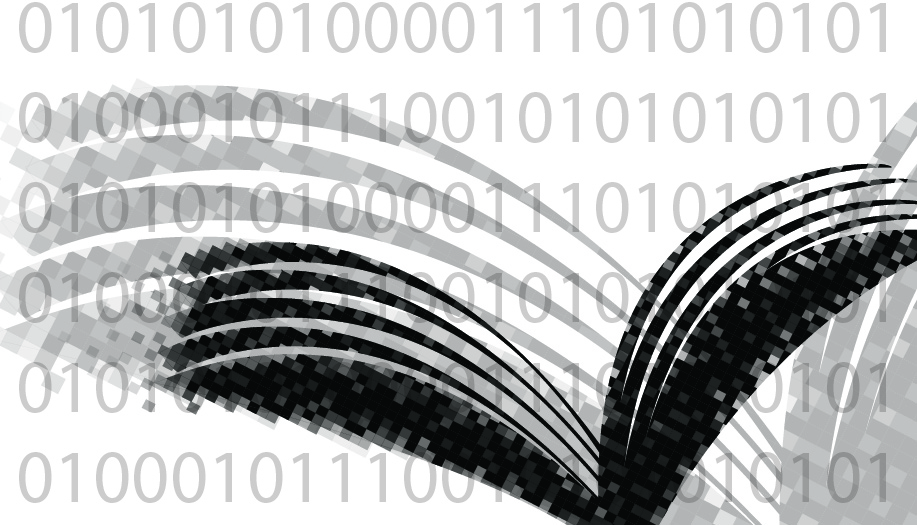 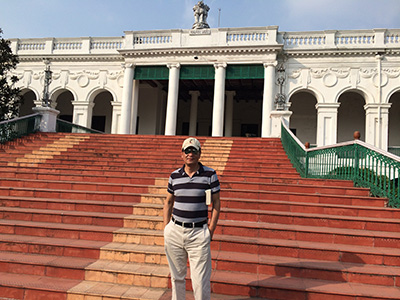 A Note from the Dean: Recent Activity of the Mellon Grant Project