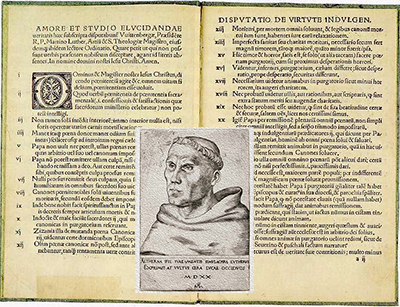 In 1517, Martin Luther wrote his 95 theses criticizing the practice of indulgences of the Catholic church. He was disturbed by the fact that the faithful were allowed to offer money as penance for their sins. The publication of the 95 theses is considered as the starting point of the Reformation, which marks its 500th anniversary on October 31, 1517, the date long assumed that Luther nailed his theses to the door of the Castle Church at Wittenberg.

A new exhibit on display on the 4th floor lobby of the Walter C. Langsam Library, as well as on the 4th floor of the library, highlights the complex and multifaceted legacy of the Reformation. It combines publications from the University of Cincinnati Libraries’ collections and the poster exhibition “Here I Stand. Martin Luther, the Reformation and its Results.”

Included in the exhibit is a list of other Cincinnati events that commemorate the 500th anniversary of the Reformation. The exhibit was curated by Richard Schade, professor emeritus of German studies in the College of Arts and Sciences, and Olga Hart, coordinator of library instruction in the Research and Teaching Services Department and German subject librarian. It was designed and produced by Sami Scheidler, summer communications co-op design student from the College of Design, Architecture, Art and Planning, and Melissa Cox Norris, director of library communications.

Martin Luther, and the movement he triggered in 1517, remain central topics in the history of the Western civilization. The Reformation forever altered the face of Europe. Century-old institutions disappeared, to be replaced by new ones. Borders changed, national churches emerged and religious tensions erupted into global conflicts. The Reformation’s positive repercussions can be seen in the intellectual and cultural flourishing it inspired on all sides of the schism—in the strengthened universities of Europe, the Lutheran church music of J.S. Bach, the baroque altarpieces of Peter Paul Rubens and even the capitalism of Dutch Calvinist merchants. UC’s Archives and Rare Books Library holds significant imprints such as Luther’s De Abroganda Missa private / Concerning the Misuse of the Private Mass (1522). Images of this work are included in the exhibit along with those of woodcuts, broadsheets, pamphlets and music that show the transmission of information and opinion during the Reformation. A Reformation Bibliography (PDF) of related UC Libraries’ resources can be found at the exhibit and online.

Using RTI to Bring New Life to an Old Volume

In addition to the De Abroganda Missa private, the Archives and Rare Books Library also has in its collection Aller Bücher und Schrifften des thewren, seligen Mans Gottes Doct. Mart. Lutheri. This important volume from the collected “books and writings” of Martin Luther’s theology is one of an eight-volume set published in Jena, Germany from 1558 to 1575, begun a dozen years after his death. Luther brought the Protestant Reformation to Jena in 1523 so the city has figured largely in any study of him. The blind tooling of the bindings has become largely obscured over the centuries but with today’s technology, the elaborate designs and iconography can be revealed, greatly complementing the woodcuts and printed text and adding a depth of meaning that otherwise could be lost.

Jessica Ebert, conservation technician in the Preservation Lab, utilized Reflectance Transformation Imaging (RTI), a technique she learned at a workshop offered by Cultural Heritage Imaging (CHI) at Yale University, to create a detailed view of the volume to detect elements no longer visible to the eye.

CHI describes RTI as “a computational photographic method that captures a subject’s surface shape and color and enables the interactive re-lighting of the subject from any direction.”  For highlight RTI, which is the method used on this volume, Jessica and Catarina Figueirinhas, senior conservation technician, took a series of approximately 36-48 images of the object with a reflective black sphere in each image.  Everything is constant (i.e. the camera settings, position of the object, camera and reflective black sphere, and the light intensity and distance) except for the light position, which is moved around the object at varying angles.  The set of images were then plugged into the free RTI software provided by CHI and the algorithm detected the sphere(s) and the highlight points (from the light) captured on the sphere(s) and voila!…what is revealed is a fun and interactive way to look at an object’s surface texture. 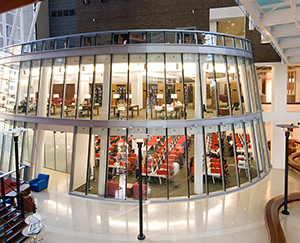